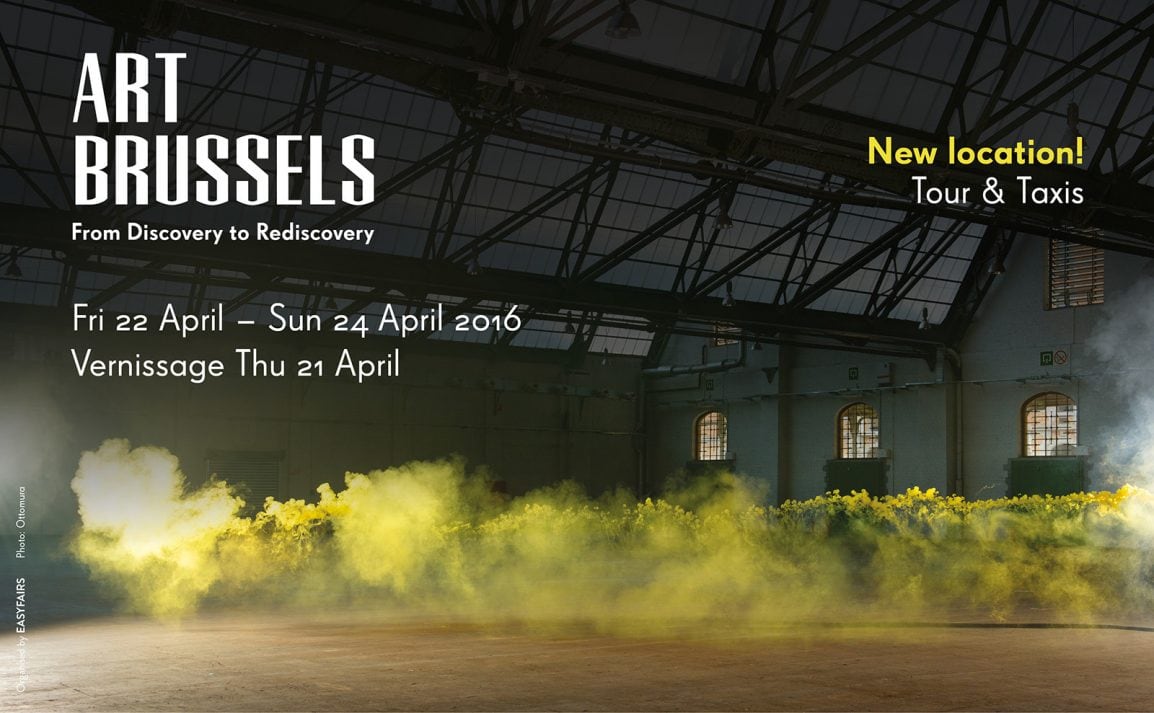 The 34th edition of Art Brussels will take place in a new location, Tour & Taxis, a spectacular example of industrial architecture built in 1904, formerly a customs house. This year, the fair has been reduced in size, bringing together 141 galleries from 28 countries, represented in three main sections: PRIME, DISCOVERY and a new section, REDISCOVERY. There will also be 24 galleries participating in SOLO, a section dedicated to the presentation of individual artists’ work.

“With our move to Tour & Taxis, Art Brussels sharpens the quality of
its list of participating galleries and strengthens its longstanding link with the vibrant Brussels art scene.”

DISCOVERY
Presenting a younger generation of artists and supporting the work of emerging and young galleries, this
section has played an important part in developing Art Brussels’ ‘discovery’ profile.
The section was launched at last year’s edition to bring together and showcase up-and-coming international
artists whose work is not yet widely known in Europe. This year it has expanded to include 30 galleries (21% of
the fair), up to eight years of age, that present works created between 2013 and 2016 by 61 artists. This section
presents collectors and art professionals alike with an opportunity to make real discoveries, and consolidates
the reputation of Art Brussels as a place to identify artists at the beginning of their careers.
Newcomers this year are: Sabrina Amrani Gallery (Madrid), angels (Barcelona), Arcade (London), :BARIL (ClujNapoca),
BWA Warszawa (Warsaw) Château Shatto (Los Angeles), Document Art (Buenos Aires),
General Store (Picton), Iragui (Moscow), Ellis King (Dublin), Neumeister Bar-Am (Berlin), The Sunday Painter
(London) and Rita Urso (Milan). Galleries can opt to present a solo presentation or a maximum of three artists
in their stands.
Galleries in the DISCOVERY section are selected by a committee comprised of: Michael Callies, dépendance
(Brussels) | Aaron Cezar, Director Delfina Foundation (London) | Zoë Gray, Senior Curator, WIELS (Brussels) |
Katerina Gregos, Curator and Artistic Director Art Brussels| Nikolaus Oberhuber, KOW Gallery (Berlin).

REDISCOVERY
This section plays a significant role in the development of the fair’s existing ‘discovery profile’. Fourteen
galleries will present works by important artists, living and deceased, from the historic avant-garde, who have
been under-estimated, overlooked, or unduly forgotten. The selection will focus on art made between 1917
and 1987, linking the beginnings of conceptual art with the advent of neo-conceptual practices and highlighting
the importance of art historical memory. REDISCOVERY aims to counteract the ‘presentism’ inherent in
contemporary art fairs, by profiling surprising, unknown and original artists that have not yet broken into the
art historical mainstream.
Highlights in this section include work by:
Roy DeCarava (1919-2009, US), the first African American photographer to receive a Guggenheim Fellowship.
DeCarava was a pioneer of a school of African American photography that broke with the social documentary
traditions of his time and was a staunch civil rights activist (Jenkins Johnson gallery, San Francisco).
Eduardo Terrazas (b. 1936, MX), a founding member of the Mexican contemporary art scene whose work
spans several disciplines including architecture, design, museology and urban planning. Terrazas became
known for developing a distinctive form of abstraction that combined geometric elements with elements from
Mexican folk art, navigating both contemporary art and craft traditions (Timothy Taylor, London).
Bob Law (1934–2004, UK) was one of the fathers of British minimalism, known for his large canvases and
drawings consisting of nothing but modified fields of black and simple abstract drawings (Richard Saltoun,
London); while Boris Lurie (1924-2008, US), who was the controversial founder of NO!art, a radical avant-garde
anti-art movement started in New York in 1959 which aimed to deliver a punch to consumerist society
(Odile Ouizeman, Paris), is seen alongside Vera Molnar (b. 1924, HU), a pioneer of computer-based and
algorithmic art (Galerie Oniris – Florent Paumelle, Rennes).
The experimental photography of Barbara and Michael Leisgen (b. 1940, DE & b. 1944, AT) which functioned as
a counterpoint to the conceptual, typological photography practiced in the 1970s is brought by
Beta Pictoris Maus (Birmingham); and Hessie (b. 1936, CU) the elusive feminist artist who produced a variety
of works in paint, textile and made out of everyday objects or detritus, by Arnaud Lefebvre (Paris)..

ARTISTIC PROJECTS
‘Cabinet d’Amis: the accidental collection of Jan Hoet’ is the flagship artistic project for Art Brussels 2016. It is
an exhibition showcasing selected works from the collection of the late Jan Hoet. Hoet (1936-2014) was an
internationally recognised Belgian curator who became known for his 1986 ground-breaking exhibition
‘Chambres d’Amis’. Jan Hoet subsequently went on to curate Documenta IX in Kassel, as well as several other
important exhibitions. He was also the founder of S.M.A.K., the museum of contemporary art in Ghent. In his
own country, Jan Hoet was one of the few people in the contemporary art world to become a household name.
His dedication and passion for art was unequivocal and his quixotic, opinionated, defiant and larger-than-life
character contributed to his legendary reputation.
Hoet’s collection is highly idiosyncratic; it was the result of relationships forged with artists throughout his
career, rather than a strategically assembled accumulation of artworks. Many works were gifts made by artists,
resulting in a collection put together not by design, or intent, but almost by accident. The result is eclectic and
whimsical, highlighting the non-conformist character of the collection’s owner. Though there are over 500
works in the collection, most are of a modest or small scale. The exhibition will feature works by established,
internationally-acclaimed and lesser-known artists from Belgium and further afield, many of which Hoet
worked closely with.
Among the artists featured are: Joseph Beuys, Christian Boltanski, Michaël Borremans, Ricardo Brey,
Marcel Broodthaers, Cai Guo-Qiang, Thierry De Cordier, Raoul De Keyser, Wim Delvoye, Jessica Diamond,
Marlene Dumas, Jimmie Durham, Günther Förg, Rodney Graham, David Hammons, Joseph Kosuth,
Kris Martin, Bjarne Melgaard, Marisa Merz, Cady Noland, Dennis Oppenheim, Panamarenko, Giulio Paolini,
Richard Prince, Nedko Solakov, Luc Tuymans, Patrick Van Caeckenbergh and Franz West.
The exhibition is curated by Katerina Gregos, with the kind co-operation of the family of Jan Hoet and will be on
view at Hôtel de la Poste, a space within the historic site of Art Brussels’ new home Tour & Taxis. The exhibition
scenography will be designed by the Brussels-based artist Richard Venlet.
The exhibition is generously supported by Anglo Belge Special Risks and Stibbe.

2016 CREATIVE CAMPAIGN
Each year, Art Brussels selects an artist to conceive its creative campaign. The campaign for 2016 has been
entrusted to OTTOMURA. OTTOMURA is a Belgian collective founded in 2010 by three photographers in order
to produce work on assignment, together or individually, without it interfering with their personal
photographic practice. The collective focuses on image-based media with an emphasis on photography in all
genres, such as exhibition documentation, fashion, photojournalism, and commercial work.
OTTOMURA’s campaign images were produced inside Art Brussels’ new venue, Tour & Taxis with a view to
highlighting the features of this spectacular industrial building from 1904. The artists engaged in a series of insitu
experiments with coloured smoke in the empty spaces of the building, creating an atmospheric, ethereal
environment – latently expectant – which will come to life between the 21st and 24th April 2016.
Anne Vierstraete, Managing Director, says: “With our move to Tour & Taxis, Art Brussels sharpens the quality of
its list of participating galleries and strengthens its longstanding link with the vibrant Brussels art scene.
By doing so, it is thus located geographically closer to the exhibitions proposed in its OFF programme, to the
shows in the galleries and the overall artistic offerings in town that will animate Brussels during late April. The
well-known Brussels Design Market will also take place at Tour & Taxis during the Art Brussels weekend, thus
diversifying the offer with complementary points of interest. The move is an excellent opportunity to enhance
quality on other parameters such as the design of the fair which, this year will be by Tom Postma Design.
Moreover, echoing Brussels’ reputation as a gastronomic hotspot, Art Brussels will offer a highly tempting
assortment of trendsetting food and drinks, under the supervision of one of Belgium’s masters in fine cuisine,
Jean-Michel Loriers (JML). Last but not least, Art Brussels thanks ING for their ongoing support since 2005; ING
will present a site specific installation by Peter Kogler, especially conceived for the fair.”

Art Brussels: Contemporary since 1968
Though it retains its youthful profile as a discovery fair, Art Brussels is one of Europe’s oldest and most
established fairs. Founded in 1968 as ‘Art Actuel’, it was conceived by a small group of well-respected Belgian
gallerists who each invited a gallery from abroad to exhibit. In the earlier years the fair had a nomadic character
moving between locations as diverse as the Casino in Knokke (1972) to the Palais des Beaux-Arts in Brussels
(1976). In 1989 the fair moved to the former Expo ‘58 premises in Heyzel where it remained until last year.
Until 1997 it was managed by the non-profit Association of Belgian Contemporary Art Galleries, when it was
bought by the Artexis-Easyfairs group, active in multi-format venues and events business at an international
level. Since its inception, Art Brussels has evolved into a must-see international contemporary art fair, and one
of the top European art fairs. The fair receives over 400 applications each year.
With the move to its spectacular new location, Art Brussels continues to evolve, with a view to retaining its
cutting-edge character (with Discovery and Rediscovery) and established talents (in Prime).